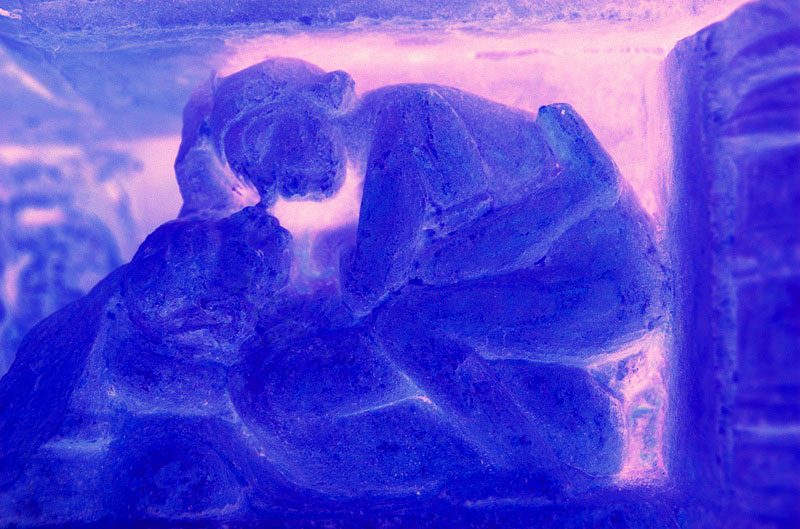 This image was shot in Khajuraho. One can discover many Kama-Sutra positions depicted in the sculptures that adorn these temples.

Approximately half of the images in the series "Passage to India" were taken at Khajuraho. The old name for Khajuraho was Kharjuravahaka (scorpion bearer), the scorpion symbolizing poisonous lust. Built under the late Chandela kings between 950 and 1050 AD, the temples there present a picture of the Tantric cult in which it is believed that gratification of earthly desires is a step towards attaining the ultimate liberation.

Just as the inside of the Temples is pure like the soul (atman), the external curvature and carvings depict the bodily changes that occur in us.

In addition to discovering the outstanding sculptural quality of these temples during a several month journey from India to China in 1992, I was struck by the realization that in the times during which Europe was engulfed in the intellectual darkness of the Middle-Ages, India was flourishing in the midst of a highly refined culture. This thought contrasted starkly with the India I discovered; in those days, one could still think of India as lagging behind the industrial might of the West. Today, only fifteen short years later, the heft of India is clearly felt in the digital world in which we live. This should not come as as a surprise considering the maturity of its culture.

Touched by how contemporary worshippers kept alive ancient cults in India, I sought to bring the past into the present and the East into the West, in my series "Passage to India". Inverting the image seemed like an appropriate way to portray the dichotomies I discovered there.